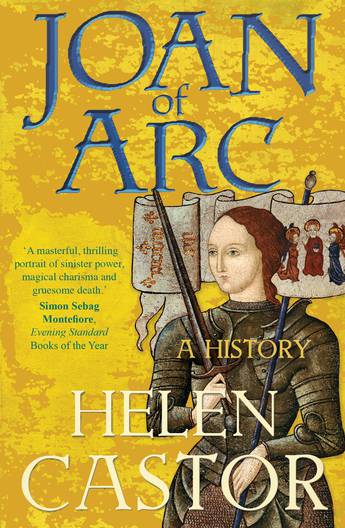 Excitingly retold by one of our finest historians, this is the story of Joan of Arc as you have never read it before.

We all know the story of Joan of Arc. A peasant girl who hears voices from God. A warrior leading an army to victory, in an age that believes women cannot fight. The Maid of Orleans, and the saviour of France. Burned at the stake as a heretic at the age of just nineteen. Five hundred years later, a saint. Her case was heard in court twice over. One trial, in 1431, condemned her; the other, twenty-five years after her death, cleared her name. In the transcripts, we hear first-hand testimony from Joan, her family and her friends: a rare survival from the medieval world. What could be more revealing? But all is not as simple as it seems, because this is a life told backwards, in hindsight - a story already shaped by the knowledge of what Joan would become.

In Joan of Arc: A History, Helen Castor tells this gripping story afresh: forwards, not backwards, setting this extraordinary girl within her extraordinary world where no one - not Joan herself, nor the people around her, princes, bishops, soldiers or peasants - knew what would happen next.
More books by this author

Helen Castor is a historian of medieval England, and a Fellow of Sidney Sussex College, Cambridge. Her first book, Blood & Roses, was longlisted for the Samuel Johnson Prize in 2005 and won the English Association's Beatrice White Prize in 2006. Her second, She Wolves, was made into a major BBC2 TV series. She lives in London with her husband and son.