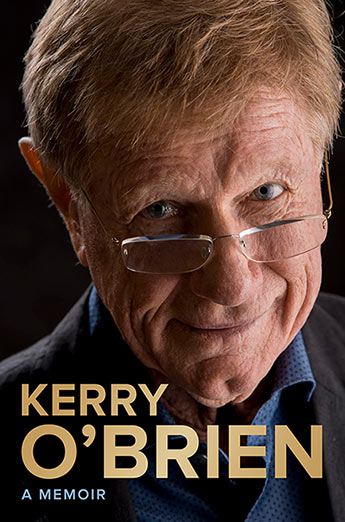 Walkley award winning ABC journalist, Kerry O'Brien, reflects on social and political upheavals he has witnessed and the personalities who have made history.

Born the day after the first American occupying troops landed near Tokyo in August 1945, Kerry O'Brien's life has spanned the post-war era through the maelstrom of the nuclear and digital age-a remarkable time of intense and dynamic change that has no match in human history. He has witnessed life changing events, interviewed the great and good, and explained the intricacies of the world to millions of Australians as we sat in the comfort and safety of our lounge rooms.

Whether strolling the history-laden corridors of the White House unhindered while waiting to interview Barack Obama, or talking with Nelson Mandela on his first day in the presidential residence in Pretoria in a room filled with the blood-soaked ghosts of apartheid, or receiving a haughty rebuke from an indignantly regal Margaret Thatcher, or exploring ideas with some of the great artists, philosophers and scientists of our time, Kerry O'Brien has sought to unearth the truth behind the news. In Australia, he has watched thirteen prime ministers come and go and has called the powerful to account without fear or favour.

In this intimate ground-breaking account told with wit and insight O'Brien reflects on the big events, the lessons learned and lessons ignored, along with the foibles and strengths of public figures who construct our world. The end result is a memoir like no other - an engrossing study of a private life lived in the public eye and wrapped in nearly three-quarters of a century of social and political history.
More books by this author

Kerry O'Brien is one of Australia's most respected journalists, with six Walkley awards including the Gold Walkley and the Walkley for outstanding leadership in journalism.

In a career spanning more than fifty years, Kerry has worked for newspapers, television and a wire service, and as a foreign correspondent. Thirty-three of those years were at the Australian Broadcasting Corporation where he cut his teeth on the trail-blazing current affairs programs This Day Tonight and Four Corners. He was the inaugural presenter of Lateline for six years, the editor and presenter of 7.30 for fifteen years, and the presenter of Four Corners for five.

His acclaimed four-part interview series with Paul Keating was broadcast on the ABC in 2013, followed by his best-selling book, Keating, published in 2015.

O'Brien has specialised in national politics for the ABC as well as the Seven and Ten television networks, and was a press secretary to Labor leader Gough Whitlam. He has honorary doctorates from the University of Queensland and the Queensland University of Technology.