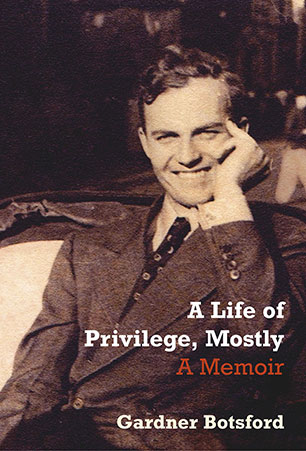 An entertaining memoir by a longtime editor of The New Yorker.

Gardner Botsford grew up in a Manhattan town house under the benign eye of five live-in servants, a charming and cultivated stepfather, and a mother whose beauty and wit attracted admirers ranging from the statesman Averell Harriman, to comic genius Harpo Marx. Botsford attended Yale, summered in France and on Long Island, married a popular and attractive girl, and won an enviable job as a reporter on The New Yorker - then, in 1942, his life of privilege was rudely interrupted. Drafted into the infantry, he trained as an officer, and on D-Day landed with the First Infantry Division on Omaha Beach in Normandy. He went on to witness the liberation in Paris (by going AWOL) and to fight in the Battle of the Bulge.

Back at the The New Yorker, Botsford was made an editor, a position he would hold until his retirement in 1982. A Life of Privilege, Mostly concludes with a series of memorable vignettes about life on the magazine and about NewYorker ornaments such as A.J. Liebling, Maeve Brennan and William Shawn, Botsford's long-term friend, mentor, boss, and, at the last, adversary.
More books by this author

Gardner Botsford (1917-2004) was a distinguished editor at The New Yorker for almost forty years. During the Second World War he served with the First US Infantry Division.