Looking at the Stars

How incurable illness taught one boy everything 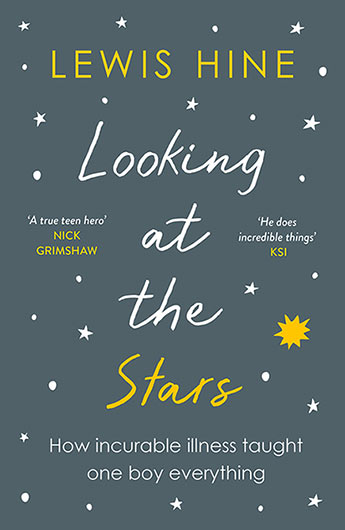 The incredible and inspirational story of Lewis Hine, the boy who was diagnosed with a brain tumour as a baby and became an internet sensation at 16 years old.

My illness may define the length of my life, but it won't define how I live it. My disability gave me the ability to understand and help others. And now I finally feel like I am living.

17-year-old Lewis Hine is a global phenomenon. Diagnosed with a life-threatening brain tumour and water on the brain at 17 months, he wasn't expected to survive. But Lewis proved everyone wrong; he's not only surviving but thriving. In one Facebook post on his 16th birthday Lewis invited everyone to see how he faces head on the challenges from his ongoing illness, and he went viral. 30 million views later, Lewis now spearheads a campaign, Friend Finder, to make sure no one ever faces childhood illness alone.

In his memoir, Lewis reaches out to anyone who may feel isolated in their lives. After 13 brain surgeries and continual health problems, life for Lewis is a daily challenge. From the sheer physical challenges - he is at high risk of sudden unexpected death in epilepsy (SUDEP) and has a pump in his brain just to keep him alive - to the horrendous bullying he's endured, he shares how he finds the strength to overcome all this and still lead a fun and fulfilling life. With a host of admirers around the world from Elton John to Kid Ink, Lewis is living his dream - even becoming Radio 1's Teen Hero of the Year. His story will make you laugh, cry and above all, feel inspired by life's endless possibilities, looking at the stars.
More books by this author

Lewis Hine is a social media phenomenon, racking up millions of views as he bravely invites the world to see life through his eyes. He is a 16-year-old disability campaigner, and in 2016 won the BBC Radio 1 'Teen Hero of the Year' award. He also gave a talk to 10,000 enraptured children at Wembley Stadium, and has a CBBC documentary about his organization, Friend Finder, which brings potentially isolated disabled and ill children together.