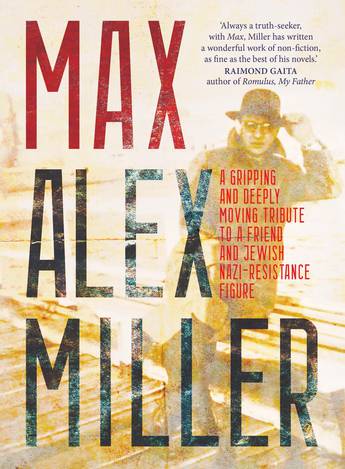 An astonishing, moving tribute to Alex's friend, Max Blatt, that is at once a meditation on memory itself, on friendship and a reminder to the reader that history belongs to humanity.


SHORTLISTED FOR THE NATIONAL BIOGRAPHY AWARD
'Max is haunted by devastating insights. Blatt told Miller that the hardest part of torture was the realisation that the torturer was also your brother. It is the same generosity that makes Max such a compelling argument against narrowness and division. Blatt's life has deep and wide ramifications. Miller's intelligent love has created a tale for the ages.' The Age


'This book so beautifully evokes the power of places in shaping our consciousness and perception…As readers of Alex Miller, we feel ourselves to be in the presence of a great heart and a penetrating sensibility, and in the thrall of one of our nation's most beloved writers.' Tom Griffiths, Emeritus Professor of History, ANU

'Max tells of Alex Miller's search -- in turns fearful and elated -- for the elusive past of Max Blatt, a man he loves, who loved him and who taught him that he must write with love. Miller discovers that he is also searching for a defining part of himself, formed by his relation to Max Blatt, but whose significance will remain obscure until he finds Max, complete, in his history. With Max, Miller the novelist has written a wonderful work of non-fiction, as fine as the best of his novels. Always a truth-seeker, he has rendered himself vulnerable, unprotected by the liberties permitted to fiction. Max is perhaps his most moving book, a poignant expression of piety, true to his mentor's injunction to write with love.' Raimond Gaita, award-winning author of Romulus, My Father

I began to see that whatever I might write about Max, discover about him, piece together with those old shards of memory, it would be his influence on the friendships of the living that would frame his story in the present.

According to your 1939 Gestapo file, you adopted the cover names Landau and Maxim. The name your mother and father gave you was Moses. We knew you as Max. You had worked in secret. From an early age you concealed yourself - like the grey box beetle in the final country of your exile, maturing on its journey out of sight beneath the bark of the tree.

You risked death every day. And when at last the struggle became hopeless, you escaped the hell and found a haven in China first, and then Australia, where you became one of those refugees who, in their final place of exile, chose not death but silence and obscurity.

Alex Miller followed the faint trail of Max Blatt's early life for five years. Max's story unfolded, slowly at first, from the Melbourne Holocaust Centre's records then to Berlin's Federal Archives. From Berlin, Miller travelled to Max's old home town of Wroclaw in Poland. And finally in Israel with Max's niece, Liat Shoham, and her brother Yossi Blatt, at Liat's home in the moshav Shadmot Dvora in the Lower Galilee, the circle of friendship was closed and the mystery of Max's legendary silence was unmasked.

Max is an astonishing and moving tribute to friendship, a meditation on memory itself, and a reminder to the reader that history belongs to humanity.

'A wonderful book. It is a story that needs to be heard.' Jay Winter, Charles J. Stille Professor of History, Yale University

'Only a master of the craft of the novel could write a work of non-fiction of such quiet power and beauty.' Robert Manne

'…a material and public testament to the great and diverse value of Blatt's friendship. It also marks an interesting new development in Miller's writing - prose that has always been an absolute pleasure to read - as a compelling and tender story of one man's hidden history… Miller's book is a moving and masterfully written testament to the power of friendship.' The Guardian
More books by this author

Alex Miller is the award-winning author of twelve novels and a collection of essays and stories. His work is published internationally and widely in translation. Miller is twice winner of the Miles Franklin Literary Award, in 1993 for The Ancestor Game and in 2003 for Journey to the Stone Country. He is an overall winner of the Commonwealth Writers' Prize in 1993 for The Ancestor Game. Conditions of Faith and Lovesong are both winners of the Christina Stead Prize for Fiction in the NSW Premier's Literary Awards. In 2012, Autumn Laing received the Melbourne Prize for Literature for an outstanding contribution to Australian cultural life. Coal Creek won the Victorian Premier's Literary Award in 2014. Alex's twelfth novel, The Passage of Love, published in 2017, is his most autobiographical work, a deeply moving masterpiece of the writer's early struggles and loves from the vantage of old age.