The many lives of Calouste Gulbenkian, the world's richest man 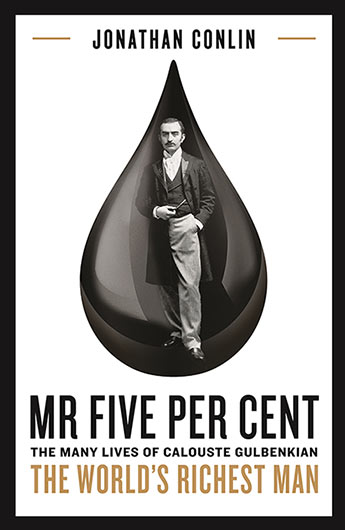 At his death in 1955, Calouste Gulbenkian was the richest man in the world, known as 'Mr Five Percent' for owning 5% of Middle East oil production. For half a century everyone from the Ottoman Sultans to Joseph Stalin sought his advice on oil policy, the latter rewarding him with Rembrandts from Russia's Hermitage Museum.

Today the companies that Gulbenkian created - including Shell and Total - are household names, while the international agreements he brokered still shape the fortunes of Iraq, Venezuela and other oil-producing countries across the globe. Yet Gulbenkian's secrecy has ensured that his remarkable story remained untold - until now.

Given unprecedented access to Gulbenkian's private papers, Jonathan Conlin pieces together the many lives of a powerful recluse: deal-maker and financier, but also diplomat, art collector and philanthropist, jealous husband and domineering father. This detailed account reveals the effects of Gulbenkian's restless life on those whose interests he sought to serve, as well as on the Foundation which remains his greatest legacy.
More books by this author

Jonathan Conlin was born in New York and studied history at Oxford University, followed by graduate work at the Courtauld Institute and Cambridge. He has taught modern British history at the University of Southampton since 2006. His books include The Nation's Mantelpiece: a history of the National Gallery, Tales of Two Cities: Paris, London and the Making of the Modern City, and a biography of Adam Smith.