My Body Keeps Your Secrets 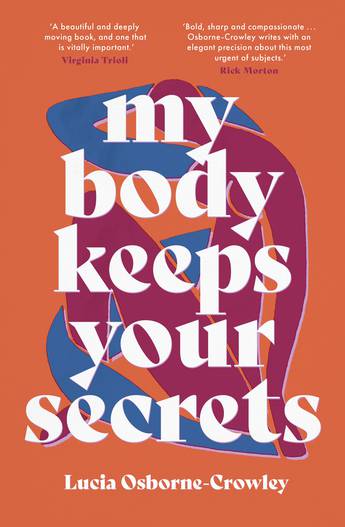 Lucia Osborne-Crowley didn't tell a soul when she was raped aged fifteen. Then, eighteen months after she was attacked, her body began to turn on her - and what followed were sudden bouts of searing, unbearable pain that saw her in and out of hospital for the next ten years.

At twenty-five, Lucia for the first time told the truth about her rape. This disclosure triggered an endless series of appointments with doctors, trauma specialists and therapists. Meanwhile, Lucia threw herself into researching the shadowy intricacies of abuse, trauma and shame.

In My Body Keeps Your Secrets, Lucia shares the voices of women and trans and non-binary people around the world, as well as her own deeply moving testimony. She writes of vulnerability, acceptance and the reclaiming of our selves, all in defiance of a world where atrocities are committed and survivors are repeatedly told to carry the weight of that shame.

Widely researched and boldly argued, this book reveals the secrets our bodies bury deep within them, the way trauma can rewrite our biology, and how our complicated relationships with sex affect our connection with others. Crafted in a daring and immersive literary form, My Body Keeps Your Secrets is a necessary, elegant and empathetic work that further establishes Lucia's credentials as a key intersectional feminist thinker for a new generation.

'Brave, unflinching and infuriating, the stories Lucia has collated are ones that desperately need to be heard' Osman Faruqi, award-winning journalist

'Lucia Osborne-Crowley knows the natural range of the human body is so much greater than we have imagined. She has lived it. This book is a clever catalogue of the ways our bodies endure and the work they do in making sure we do, too. Osborne-Crowley writes with an elegant precision about this most urgent of subjects. Like the human body, this book contains a warning: if we do not attend to its revelations, there may well be pain. Bold, sharp and compassionate, this work announces Osborne-Crowley as a writer with great purpose.' Rick Morton, author of One Hundred Years of Dirt and My Year of Living Vulnerably

'It is both thrilling and terrifying when a body refuses to remain silent anymore. My Body Keeps Your Secrets is a beautiful and deeply moving book, and one that is vitally important: we have so much still to learn about the somatic nature of assault and trauma. Lucia Osborne-Crowley has written an insightful and moving witness statement for women who live with the consequences of assault and abuse, and for the world that has refused to see. Our bodies hold our traumas, and Osborne-Crowley refuses to keep the silence anymore.' Virginia Trioli, journalist, author, radio and television presenter
More books by this author

Lucia Osborne-Crowley is a journalist, essayist, writer, and legal researcher. Her news reporting has appeared in ABC News, Guardian, Huffington Post, The Wall Street Journal, and Women's Agenda. Her long-form writing has appeared in The Lifted Brow and Meanjin.