My Life in Orange

Growing Up with the Guru 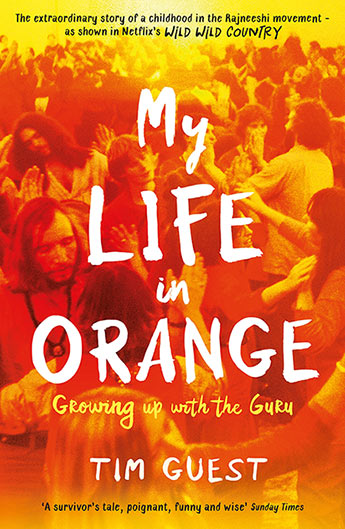 The bestselling memoir of a childhood in the Rajneeshi cult - as seen in hit Netflix documentary Wild Wild Country.

In 1981 Tim Guest was taken by his mother to a commune in a small village in Suffolk. It was modelled on the teachings of the famous Indian 'guru', Bhagwan Shree Rajneesh, who preached an eclectic doctrine of Eastern mysticism, chaotic therapy and sexual freedom. Both were given Sanskrit names, dressed entirely in orange and instructed to completely abandon their former identities.

Tim - or Yogesh, as he was now known - spent the rest of his childhood in Bhagwan's various communes in England, Oregon, Pune and Cologne. While his mother meditated, chanted and ran therapy groups, Yogesh lived a life of unsupervised freedom, occasionally catching glimpses of the strange behaviour of the adults around him. In 1985 the movement collapsed after Bhagwan's arrest and Yogesh was once again Tim, about to start life at a secondary school in North London, alone with the secret of his extraordinary childhood.

In his first book, now in a new edition, Guest describes the other-worldly experience of growing up in an environment of unsupervised freedom and often disturbing adult behaviour.

Tim Guest spent his childhood moving between Rajneeshi communes in England, India, Germany and the United States, before leaving aged eleven. He was the author of two acclaimed books, My Life in Orange and Second Lives. His journalism was published in the Observer, Guardian and Telegraph. He died in 2009.