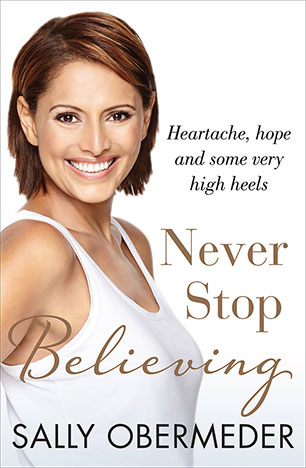 Star of the Seven Network's Today Tonight shares her truly inspiring story of triumph over almost unbeatable odds in a wonderfully warm, funny and honest memoir about her struggle to succeed in the cut-throat world of commercial television and her courageous battle with cancer.

When Sally Obermeder woke up on 13th October 2011, she thought her life was perfect. She had a glamorous, successful career as a reporter for Today Tonight, she had a wonderful husband and she was about to give birth to her baby who she had conceived through IVF following years of struggle to conceive naturally. Finally, she had everything she had ever wanted.

But then, during a routine appointment with her obstetrician, Sally was told she had a severe form of breast cancer. Her baby had to be induced and treatment needed to begin immediately. This was the start of the hardest year of Sally's life. A year where she would be tested to the very limits and would be forced to fight for her life.

A year on Sally has a gorgeous baby girl and is finally on the mend. Following her second mastectomy in September, she received the good news that she is now cancer free.

Despite her life changing struggle and the hardships she has had to endure, Sally is one of the warmest, most vibrant people. She was determined to beat cancer. And now she is determined to help others.

Sally is a wonderfully inspirational person whose story is filled with raw honesty but also love, laughter and warmth.

Sally Obermeder is best known for her reporter role on the 7 Network's Today Tonight. But she has also presented on The Morning Show and Sydney Weekender. She lives in Bondi with her husband and baby daughter Annabelle.