A story of courage and adventure 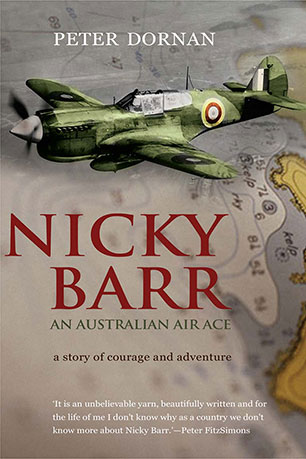 A compelling personal account of an Australian fighter pilot in World War 2.

Nicky Barr never deliberately sought danger or adventure, but when confronted with it he had the courage to face it and survive.

In 1939, at the age of 23, Nicky Barr was chosen to represent Australia in the international rugby world tour. The day after the squad arrived in England, war was declared and the tour was cancelled. Nicky immediately signed-up to become a fighter pilot in the RAAF and while fighting Rommel's famed Afrika Korp in North Africa, quickly rose through the ranks to become a squadron leader.

In the space of twelve months, Nicky shot down over twelve enemy planes, and was himself shot down three times. The third time, he was seriously wounded, including a leg injury that was to put an end to his rugby playing days, then captured and sent to Italy as a hospitalised prisoner of war. Nicky escaped four times-including once from a moving train. On the fourth escape he successfully evaded recapture and, together with a group of special operation commandoes, took part in a series of clandestine operations behind enemy lines and helped fellow prisoners of war escape.

Nicky Barr earned a reputation amongst allies and enemies alike for his acts of bravery, his selflessness, his dogged determination and his infectious sense of humour. His is a story of adventure, war, courage and mortality, and the love for his wife that sustained him through it all.
More books by this author

Peter Dornan is a Brisbane physiotherapist and is author of The Silent Men.

Introduction: Beyond the call of duty

11 Battle of the Cauldron

Epilogue: the years after