Women in Comedy Claiming their Space, Finding their Voices and Telling their Stories 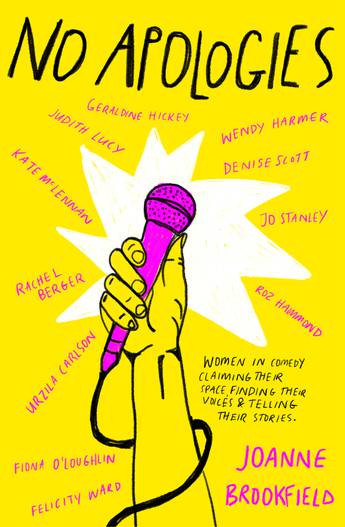 Everyone says the future is female, but that change is happening right now. Across the planet, women's voices are being heard like never before...

Joanne Brookfield has spent two decades working in the world of comedy, as both a journalist and a stand-up comedian. Over coffee, wine, laughter and tears, she's talked with the women of comedy about every aspect of their lives, from the butterflies of their first gigs to the hell of their worst. From writing, gigging and touring, to the times they almost gave up, these women share the ways they've lived the feminist war cry of 'nevertheless, she persisted' and the triumphs they've enjoyed as a result.

Representing a multitude of backgrounds, styles and content, the women in comedy cover the full spectrum of human experience and this book celebrates them all, from the trailblazers who paved the way to the talented new stars who are actively transforming the landscape of performance.

A funny and feisty read, at its core No Apologies is about the power of women, their voices and their stories.
More books by this author

Joanne Brookfield is a journalist and comedy writer. A graduate of RMIT's BA in Journalism, she works as a freelance print journalist, writing mainly for Fairfax (The Age, Sydney Morning Herald and the Canberra Times). She has also contributed to The Guardian UK, The Sunday Herald Sun, The Mercury, The Courier Mail plus a variety of magazines. A lifelong comedy fan, she has always reported on the world of comedy, having covered the three biggest festivals in the world - Melbourne International Comedy Festival, Edinburgh Festival Fringe and Montreal Just For Laughs - plus other comedy and fringe festivals. She's also been a stand up herself, having performed multiple seasons of her shows around Australia and New Zealand.