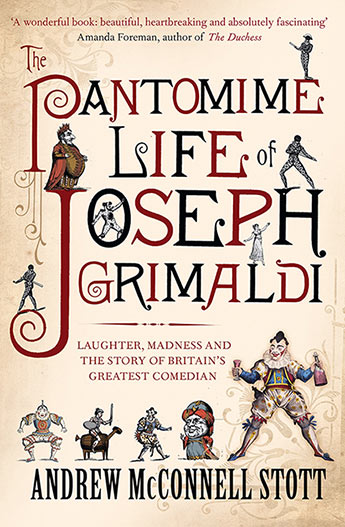 The son of a deranged Italian immigrant, Joseph Grimaldi (1778 - 1837) was the most celebrated of English clowns. The first to use white-face make-up and wear outrageous coloured clothes, he transformed the role of the Clown in the pantomime with a look as iconic as Chaplin's tramp or Tommy Cooper's magician. One of the first celebrity comedians, his friends included Lord Byron and the actor Edmund Kean, and his memoirs were edited by the young Charles Dickens.

But underneath the stage paint, Grimaldi struggled with depression and his life was blighted with tragedy. His first wife died in childbirth and his son would go on to drink himself to death. The outward joy and tomfoolery of his performances masked a dark and depressing personal life, and instituted the modern figure of the glum, brooding comedian.

Andrew Stott is Associate Professor of English at the State University of New York, Buffalo, where he specialises in comedy, popular culture and the history of the theatre from the sixteenth to the nineteenth centuries. In 2005 he wrote Comedy (Routledge), an academic study of the art, and has since become a comedy pundit, offering commentaries to New York's WNYC radio and Slate magazine.