Falling in (love) with the French 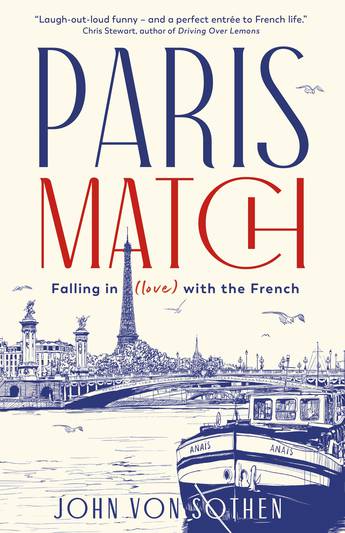 An American falls in love and becomes a Parisian - just not the way he imagined.

In Brooklyn, John von Sothen fell in love with Anais, a French waitress. And then, one night in Paris, on the Pont Neuf, she agreed to marry him ("Bah, we can always get divorced!"). A couple of decades in, the two have become quatre, living in their beloved 10th arondissement with teenage kids who chat to their African neighbours in fluent Parisian slang, and John has even become kind of French himself. Well, he likes to think he has. The family still see him as an American innocent abroad.

Paris Match is one of those rare books that makes you laugh out loud, as von Sothen attempts to understand what makes the French tick. Why do they take such long holidays with friends who ration snacks and mock you for sleeping in; why do French men turn to him (an American!) for fashion tips; what really is the correct way to cut brie, and how do you tell if you're being invited to a super-exclusive secret society of intellectuals or a weird sex club? John von Sothen has found most of the answers and in this delightful, witty book shares his experience, insights and humour into the fine art of becoming everyday French.
More books by this author

John von Sothen is an American writer living in Paris, where he works for Vanity Fair, Esquire and other magazines, does voice-overs for French luxury brands, and occasionally performs stand-up comedy (in French and English!). He lives with his actress wife Anais, their children Bibi and Otho, and their dog Bogart, who has recently become a rom-com film star.