The Memoirs of a Royal Parks Gamekeeper 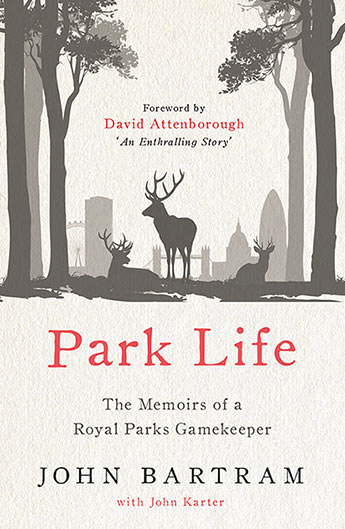 A remarkable diary chronicling the final working year of the charmed life of John Bartram, gamekeeper and senior wildlife officer at Richmond Park for the past thirty years.

'Retire? You can't retire!', Sir David Attenborough told John Bartram, when the man who has been gamekeeper and senior wildlife officer for Richmond Park for the past thirty years announced his intention to step away from the role, bidding farewell to the iconic park which has been his home, the backdrop for a career many would give anything for, and a way of life for so long.

During a career spanning four decades John has been the behind-the-scenes mastermind ensuring the welfare and maintenance of Richmond Park's world-famous herd of deer - widely thought of as the finest herd in captivity. Working with these fabled creatures has demanded balancing their needs with the very real, often fatal dangers the park's visitors pose to his herd, and John pulls no punches when it comes to his opinion on the deer's place in the scheme of things, the human 'invaders' and the collision of their two worlds.

A remarkable diary chronicling the final year of John's charmed life as the guardian of Richmond Park, this memoir tells of the unique demands of each new season, and of the enormous wrench he will feel upon no longer waking up in the midst of so much unchanged and wild beauty. Park Life is a treasure trove of stories and memories, some poignant and moving, others offbeat and hilarious: from the quirk of fate and farcical interview that led to him getting the job, to living in close quarters with the deer, the tragedy of putting down fatally wounded animals, and the annual ritual of the rut - as dependable as the rising and setting of the sun.
More books by this author

John Bartram started life as an apprentice blacksmith for Richmond council in 1970 and two years later joined their parks department where he stayed for eight years working in a tree unit. He began his career as a gamekeeper in 1980 with Kew Gardens, where he met his wife, Maggie, a wildlife artist, who he married in 1988. He took on the same role for Richmond Park in 1986, remaining in the post for thirty years, during which time his job title was changed to Senior Wildlife Officer. John and Maggie lived in Kingston Gate Lodge in Richmond Park before moving to Walton on Thames on his retirement in 2016. For relaxation he enjoys bird watching with Maggie, fishing, tending his allotment, and playing bowls.

John Karter is a former writer for The Sunday Times, The Times, and The Independent, and the author of five published non-fiction books: Introducing Psychology of Relationships, The Love Delusion, On Training to be a Therapist, Frankie Dettori - the Illustrated Biography, and Lester - Return of a Legend, as well as a novella, The Profit. As an avid cyclist, walker and nature lover, Karter considers nearby Richmond Park to be his second home. He wrote the text for Richmond Park and edited the Guide to Richmond Park. He has contributed to various other books and publications and works as volunteer writer and editor for RNIB (Royal National Institute for Blind People). He is also a qualified psychotherapist.