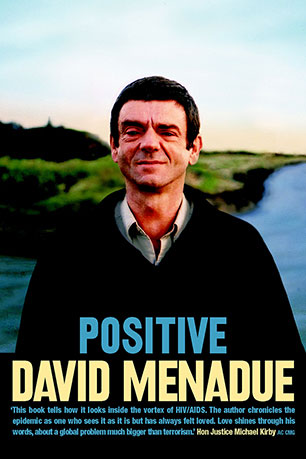 An uplifting story of resilience and activism, the memoir of David Menadue, one of the longest surviving people with AIDS in Australia.

Positive is an account of a special life fearlessly told, as well as a chronicle of an era. Fifteen years ago, HIV and AIDS meant one thing - death. In 1984 David Menadue was one of the first people to be diagnosed with HIV in Australia. He was just 30 years old and thought it unlikely he would make it to 40. He turned 50 last year and has been living with AIDS for longer than almost anyone else in this country.

Positive is about many things: recent Melbourne history, the distress experienced as the gay community was decimated, and desire. But it is also a story about optimism and the ability to take things day by day. It is about continuing to live when everyone around you expects you to die.
More books by this author

David Menadue is a journalist and an AIDS activist. He is a member of many national HIV organisations, a media spokesperson and was awarded an Order of Australia in 1995. David is an associate editor for Positive Living, a national magazine for people with HIV/AIDS, and since 1994 has been writing a regular column on living with AIDS.