The story of the extraordinary Mrs Mac, pioneering engineer and wartime legend 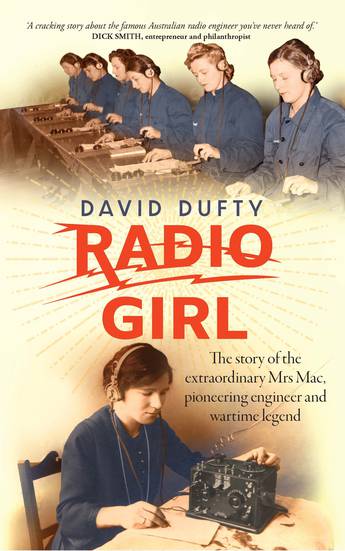 All around Australia, former WRANs and navy men regard the woman they know as Mrs Mac with a level of reverence usually reserved for saints. Yet today no-one has any idea of who she was and how she rescued Australia's communication systems in World War II.

As you climbed the rickety stairs of an old woolshed at Sydney harbour in 1944, you would hear the thrum of clicks and buzzes. Rows of men and women in uniforms and headsets would be tapping away vigorously at small machines, under the careful watch of their young female trainers. Presiding over the cacophony was a tiny woman, known to everyone as 'Mrs Mac', one of Australia's wartime legends.

A smart girl from a poor mining town who loved to play with her father's tools, Violet McKenzie became an electrical engineer, a pioneer of radio and a successful businesswoman. As the clouds of war gathered in the 1930s, she defied convention and trained young women in Morse code, foreseeing that their services would soon be sorely needed. Always a champion of women, she was instrumental in getting Australian women into the armed forces.

Mrs Mac was adored by the thousands of young women and men she trained, and came to be respected by the defence forces and the public too for her vision and contribution to the war effort. David Dufty brings her story to life in this heartwarming and captivating biography.

'A cracking story about the famous Australian radio engineer you've never heard of.' - Dick Smith, entrepreneur and philanthropist
More books by this author

David Dufty has a PhD in psychology, and has worked as a statistician and social researcher at the University of Memphis, Newspoll, and the Australian Bureau of Statistics. His book The Secret Code Breakers of Central Bureau won the 2017 Nib Military History Prize.