From ultra-cycling rookie to racing across America 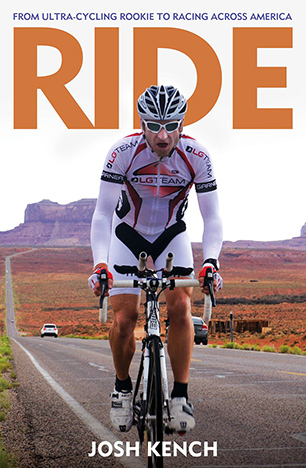 How a pretty unfit, very ordinary bloke became an ultra-endurance cyclist and undertook one of the great feats of human endurance.

At his brother's wedding in 2002, 30-year-old Josh Kench sat with a cigarette in one hand and a beer in the other, and announced that he was going to do the Coast to Coast. His pronouncement was met with derision, but he's proved his doubters wrong.

Josh won the 2010 Lake Taupo Extreme Enduro, covering a mind-numbing eight laps of the 160-kilometre course in 55 hours. And that's only the start of it. In June 2011, this 39-year-old plumber lined up at the start of the Race Across America - a 16-day race covering 4828 kilometres from California to Maryland.

This is the story of how an ordinary bloke became an ultra-endurance athlete and decided to take on the world.
More books by this author

Josh Kench is an ordinary Kiwi bloke who works as a plumber in Wellington by day. Nights and weekends see him out on his bike riding very long distances for fun.

Kerry Jimson was one of the brains behind the New Zealand TV shows Skitz and Public Eye. He now works as a freelance writer in Wellington. This is his first book.