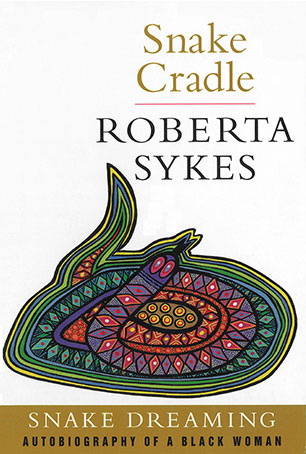 'Once, in winter, after I had scrambled up the hill beside the cathedral, a snake and I were both enjoying basking in the warmth of the sun's mid-morning rays, when we spotted each other. It was a powerful moment. We fell into complete stillness, each looking at the other's eyes and watching to see whether the other meant any harm. At the end of our mutual appraisal, I knew the snake was not a danger to me and continued to lay on the rock without fear. Although other smaller snakes, to Mum's mortification, sometimes slipped in and out of the retaining walls beside our house, this cathedral snake became my first real encounter.'

Snake Cradle is the first volume of Roberta Sykes's three volume autobiography, Snake Dreaming. Snake Cradle chronicles the early years of one of Australia's best known activists for Aboriginal rights, from the time of her birth in Townsville in the 1940s through to the birth of her son when she was 17, and the trial of the men who raped her.

Roberta's voice is strong and true as she describes far north Queensland of the time, her battles with a series of childhood illnesses, and her growing awareness that hers was not an ordinary Australian childhood. Born to a white mother and a father whose identity she did not know, her passion and commitment to the struggles of the Aboriginal people was shaped by the racism her dark skin invoked. A powerful and moving autobiography about a history that must never be forgotten.
More books by this author

Dr Roberta Sykes was born in the 1940s in Townsville and is one of Australia's best known activists for Aboriginal rights. She received both her Master and Doctorate of Education at Harvard University, has been a consultant to the NSW Department of Corrective Services and the Royal Commission into Aboriginal Deaths in Custody, was the Chairperson of the Promotions Appeals Tribunal at the ABC, and is the author of several books, including Love Poems And Other Revolutionary Actions (1979) and Mumshirl (1981), as well as having contributed to or co-authored numerous publications, journal articles, conference papers and screenplays.