The Boy with Two Hearts 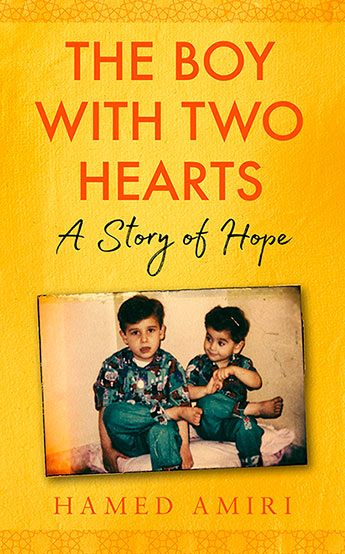 One family's escape from the Taliban and their fight to save their son.

A powerful tale of a family in crisis, and a moving love letter to the NHS

Herat, Afghanistan, 2000. A
mother speaks out against the
fundamentalist leaders of her
country. Meanwhile, her family's
watchful eyes never leave their
beloved son and brother, whose
rare heart condition means that
he will never lead a normal life.

When the Taliban gave an order for
the execution of Hamed Amiri's mother,
the family knew they had to escape,
starting what would be a long and
dangerous journey, across Russia and
through Europe, with the UK as their
ultimate destination.

Travelling as refugees for a year and a
half, they suffered attacks from mafia and
police; terrifying journeys in strangers'
cars; treks across demanding terrain;
days spent hidden in lorries without food
or drink; and being robbed at gunpoint of
every penny they owned.

The family's need to reach the UK
was intensified by their eldest son's
deteriorating condition, and the prospect
of life-saving treatment it offered.

The Boy with Two Hearts is not only a
tale of a family in crisis, but a love letter
to the NHS, which provided hope and
reassurance as they sought asylum in the
UK and fought to save their loved ones.
More books by this author

Hamed Amiri was born in Herat,
Afghanistan, and grew up under
Taliban rule before escaping at the age
of ten. He is a motivational speaker
and influencer in the education sector,
and a board member at Coleg Gwent,
Wales. In 2016 he was awarded the
Inspiring the Next Generation Award
by the University of South Wales
for services to education and young
people. Inspired by his late brother's
passion for positive change in society,
Hamed's mission is to share his family's
story with a wide audience and change
perceptions surrounding refugees and
diversity. This is his first book.