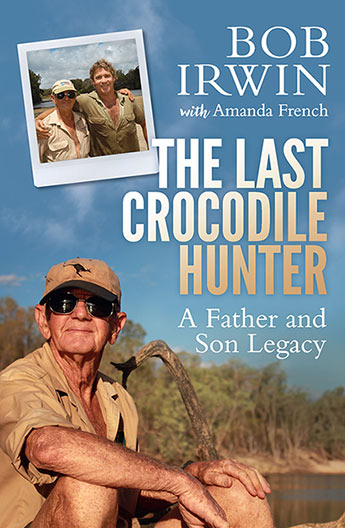 Bob Irwin's extraordinary life as a wildlife pioneer, father to wildlife warrior Steve and founder of Australia Zoo, told in his own words.

'When the world lost Steve, the animals lost the best friend they ever had, and so did I. But he's still here with me and knowing that means that I am able to gain strength from him, and harness the same passion and drive that he and I had together. There are so many people who have been inspired and are still being inspired by Steve Irwin and that makes me feel really, really proud.' - Bob Irwin

Passion for the environment and all animals was a way of life for Bob Irwin and his young family at their wildlife park on the Sunshine Coast. This unique upbringing had a profound impact on Bob's son Steve, who followed in his father's footsteps and became famous around the world as the Crocodile Hunter, educator and wildlife warrior.

Bob nearly didn't survive the sudden death of his adored wife Lyn, and it was Steve who helped him face life again. When the world tragically lost Steve to a freak diving accident, it wasn't just the animals that lost the best friend they ever had. Bob did too. Describing it as moving forward without a map, Bob spent many years burying himself in physical work, as a means to cope with the loss of his son. It was the natural world and the animals within it that helped Bob to keep going, and since then he has continued to fight for his beloved Steve's legacy of protecting the wildlife, environment and planet on which our own survival depends.

Entertaining, moving, impassioned and inspiring, The Last Crocodile Hunter shows the heart and soul of a great Australian character, father and wildlife campaigner.
More books by this author

Bob Irwin is a celebrated Australian naturalist, animal conservationist, and a pioneering herpetologist who is also famous for his conservation and husbandry work with apex predators and reptiles. He was the original founder of Australia Zoo, which he and his wife opened as the small, family run Beerwah Reptile Park in 1973, with the intention of increasing public knowledge of native wildlife.

Bob and his late son Steve, went on to implement and manage a wide variety of research projects into Australian reptiles in collaboration with various universities and government departments. This work has had a major influence on wildlife management today.

Bob's work, and the Irwin legacy, is recognised for helping to educate millions of people about the importance of nature conservation. Bob is continuing his and Steve's legacy though the Bob Irwin Wildlife & Conservation Foundation, giving a voice to Australian wildlife and educating the next generation of grassroots conservationists through research, advocacy and education.

Amanda French is a Queensland based media and communications specialist across various wildlife causes. Amanda has worked both in the field and remotely in developing campaigns and providing support to international wildlife projects such as Bona the Sumatran elephant in Indonesia and Australian not-for-profit organisations Free the Bears Fund and Quoin Island Sea Turtle Rehabilitation Centre.

Amanda also works with Australian naturalist Bob Irwin to provide support to many Australian wildlife organisations through Bob's public advocacy. Together they have clocked up more than 20,000 kilometres on the road to tell their stories and inspire others.

Amanda's work within the wildlife arena has been told on ABC's Australian Story in March 2013 and again in May 2015.