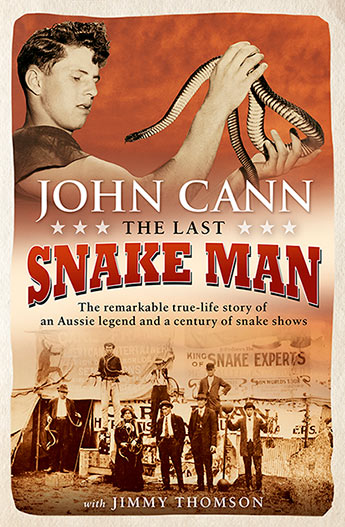 Wildlife warrior, professor of snakes, entertainer, Olympian. John Cann is a truly remarkable Australian. Written in John's engaging and affable voice, The Last Snake Man tells the story of John and his fascinating family, who entertained Australians for nearly a century with their incredible snake shows.

Every Sunday for almost a century John Cann's family ran the famous snake show in a pit at La Perouse - an area once alive with tiger, brown and black snakes. After growing up with over 300 'pet' snakes in their backyard, John and his brother George took over the snake show from their parents in 1965. By the time John retired in 2010, he'd survived five venomous snake bites.

Many of those familiar with John and his shows wouldn't know that he was also an Olympic athlete, a top state rugby league player who played alongside some of the legends of the game, a state champion boxer, an adventurer and a world authority on turtles.

The Last Snake Man chronicles John's extraordinary life and times. From wrangling snakes to chasing turtles, from remote country towns to the impenetrable jungles of New Guinea, this is the story of an amazing Australian and his never-ending search for fascinating animals and adventure.
More books by this author

JOHN CANN is the Snake Man of La Perouse and performed public Sunday snake shows for 45 years. He is an environmental conservationist and wildlife expert. He is author of Freshwater Turtles of Australia and the Cann's snake-necked turtle is named after him.

JIMMY THOMSON is a journalist, author and screenwriter. He is the author of Snitch, Watto and Wendell Sailor: Crossing the line, and co-wrote Tunnel Rats and A Sappers' War with Sandy MacGregor.

1. The Snake Man of La Perouse

2. Cleopatra, Queen of the Snakes