The autobiography of Kylie Tennant 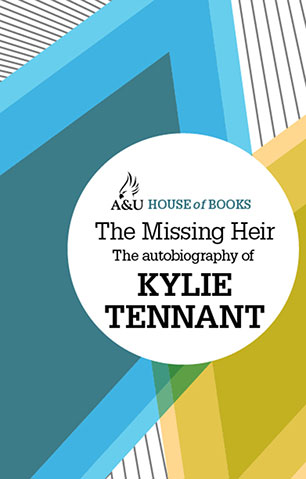 Kylie Tennant's novels are known for their vitality and social realism, and The Missing Heir is in the same tradition. Wicked pen-portraits of her forebears and parents set the scene before the narrative moves on to Kylie herself.

The story of her life unfolds vividly. Kylie Tennant has never done the easy or the obvious thing. It is hardly surprising to read that the writer who went to jail so that she could write about it accurately, and who tramped the dusty roads of the outback during the depression, was a misfit at school and hated her first job. The thread of the Missing Heir runs through the book. Kylie Tennant relates her father's attachment to the romantic idea of himself as the Missing Heir of the Tennant Clan. As a small girl she scorned this pretentious notion, and others like it, and set about asserting her independence. In time she herself, then her son and her son's son all became the Missing Heir in their turn. Kylie Tennant's life has been restless, sometimes difficult and tragic. Yet she has given us wonderful books capturing the broad canvas of Australian people, society and landscapes. In this book she has given us another - The Missing Heir.
More books by this author

Kylie Tennant was the author of nine novels, plus short stories, plays, journalism, criticism and biography as well as much writing for children. She is noted for her social realist studies of urban and rural working-class life from the 1930s, that began with Tiburon (1935), and included Foveaux (1939), named after a street in the slums of Surry Hills.

Her working life encompassed such jobs as barmaid, reviewer, church sister and publicist for the ABC. Seeking to be true to the society she observed, she took to the road with itinerant workers in the worst years of the Depression, and went so far as to spend a week in gaol for the sake of research.