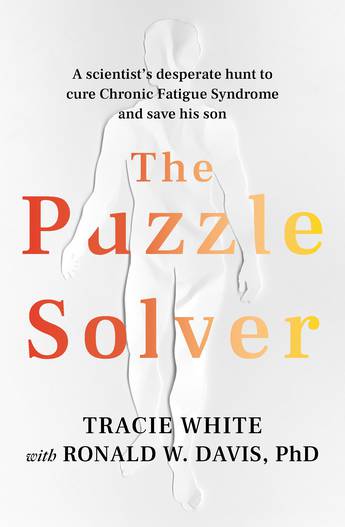 Based on a viral article, the gripping medical mystery story of Ron Davis, a world-class Stanford geneticist who has put his career on the line to find the cure for chronic fatigue syndrome, the disease killing his son.

At the age of twenty-seven, a mysterious illness began to eat away at Whitney Dafoe. It stole away the strength of his legs, then his voice, and his ability to eat, until even the sound of a footstep in his room became unbearable. For years, he underwent endless medical tests until finally receiving a diagnosis: Chronic Fatigue Syndrome.

With no cure or successful treatment, Whitney's father, Ron Davis, PhD-a world class geneticist at Stanford University whose legendary research helped crack the code of DNA-suddenly changed the course of his career in a race against time to cure his son's debilitating condition.

In The Puzzle Solver, journalist Tracie White-who wrote the viral and award-winning piece on Ron and his family in Stanford Medicine-tells the full story. In gripping prose, she masterfully takes readers along on this journey with Davis to solve one of the greatest mysteries in medicine.
More books by this author

Tracie White is an award-winning journalist and a science writer for Stanford University. Her work, which has garnered 23 writing awards, has also appeared in Salon, the Los Angeles Times, the San Francisco Chronicle, and more. She graduated from UC Berkley and has a master's degree in journalism from Northwestern University. She lives in Aptos, California.

Ronald W. Davis, PhD, has been called one of the world's greatest living inventors by the Atlantic. He is a professor of Biochemistry and Genetics at Stanford University and director of the Stanford Genome Technology Center. He has won numerous awards for his research, including the Gruber Prize in genetics for his groundbreaking contributions to the field of genomics. He now is devoted to finding a cure for Myalgic Encephalomyelitis/Chronic Fatigue Syndrome (ME/CFS).