A lifetime of extraordinary discovery and adventure in the deep seas 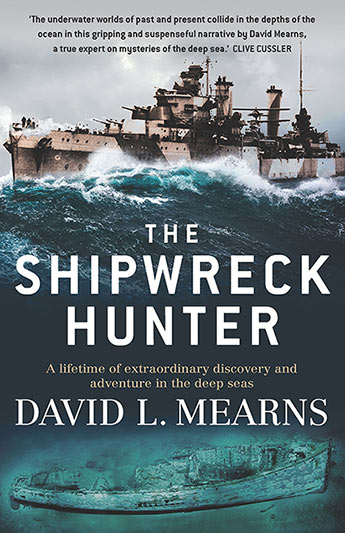 David Mearns, the man who discovered the wreck of HMAS Sydney, takes us on an extraordinary voyage through his amazing career as one of the world's most successful shipwreck hunters.

'The underwater worlds of past and present collide in the depths of the ocean in this gripping and suspenseful narrative by David Mearns, a true expert on the mysteries of the deep sea.'
CLIVE CUSSLER

David Mearns has found some of the world's most fascinating and elusive shipwrecks. His deep-water searches have solved the 66-year mystery of HMAS Sydney, discovered the final resting place of the mighty battlecruiser HMS Hood and revealed the Australian Hospital Ship Centaur in the narrow underwater canyon that served as its grave. His painstaking historical detective work has led to the shallow reefs of a remote island that hid the crumbling wooden skeletons of Vasco da Gama's sixteenth century fleet.

The Shipwreck Hunter is the compelling story of David's life and work on the seas, focusing on some of his most intriguing discoveries. It details the extraordinary techniques used, the research and the mid-ocean stamina and courage needed to find a wreck kilometres beneath the sea, as well as the moving human stories that lie behind each of these oceanic tragedies.

US-born marine scientist, researcher and deep-sea shipwreck hunter David Mearns OAM has found and filmed some of the world's most famous and controversial shipwrecks; notoriously difficult wrecks that others predicted would never be found or their mysteries solved. Over his 25-year career he has led the research and discovery of 24 major shipwrecks achieving an overall success rate of 89%, and his company Blue Water Recoveries has been awarded three Guinness World Records, including one for the deepest shipwreck ever found at 5,762 metres. David is a fellow of the Royal Geographical Society and the Explorers Club.