Time to Be in Earnest 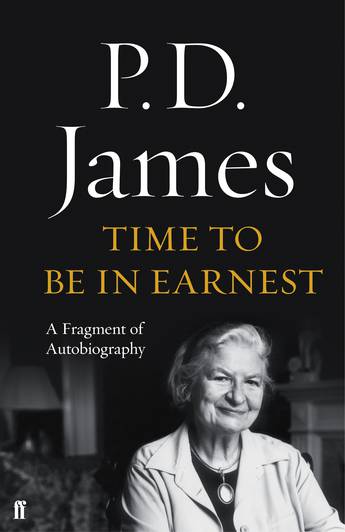 Time to Be in Earnest is P. D. James's extraordinary memoir of her early life and time starting out as a novelist, as well as diaries recording her in old age.

In this intriguing and very personal book, part diary, part memoir, P. D. James considers the twelve months of her life between her 77th and 78th birthdays, and looks back on her earlier life.

With all her familiar skills as a writer she recalls what it was like to be a schoolgirl in the 1920s and 1930s in Cambridge, and then giving birth to her second daughter during the worst of the Doodlebug bombardment in London during the war. It follows her work, starting out as an administrator in the National Health Service, then on to the Home Office in the forensic and criminal justice departments. She later served as a Governor of the BBC, an influential member of the British Council, the Arts Council and the Society of Authors, and eventually entering the House of Lords.

Along the way, this diary and personal memoir deals with her burgeoning reputation as a novelist, starting with Cover Her Face in 1962, and with the craft of the classical detective story. She also details the writing of one of her most intriguing and carefully researched books, A Certain Justice. This wonderful memoir will enthral aficionados of detective fiction, and will also appeal to anyone who lived through those turbulent years of the twentieth century.
More books by this author

P. D. James was a bestselling and internationally acclaimed crime writer. She was the creator of Adam Dalgliesh and Cordelia Gray, and their long and successful series of mysteries. Her works include Cover Her Face (1962), An Unsuitable Job for a Woman (1972), Innocent Blood (1980), Children of Men (1992), and the Jane Austen inspired Death Comes to Pemberley (2011).