Too Soon, Too Late 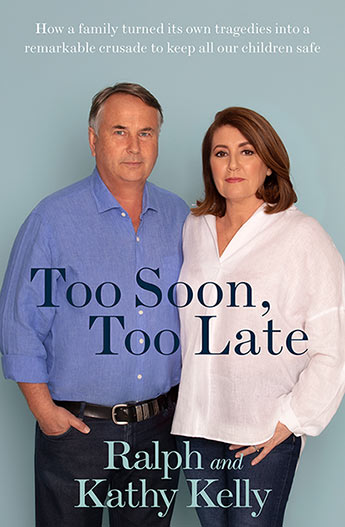 The extraordinary story of Kathy and Ralph Kelly, who turned their own family's tragedies into a remarkable crusade that's helping keep all our children safer.

On a winter's night in July 2012, Kathy and Ralph Kelly received a phone call no parent should ever have to answer. It was the Emergency department of a Sydney hospital, telling them that their eldest son Thomas had been in an altercation and that they were to come at once. Thomas had been coward punched by a total stranger within two minutes of getting out of a taxi in Kings Cross, on his way to a private 18th birthday party of a friend. Two days after that first phone call Kathy and Ralph were told that their son had suffered catastrophic head injuries resulting in brain death. They were advised that there was no other option but to switch off his life support. He was 18 years old.

In the aftermath of their son's death, Kathy and Ralph became the public face of the campaign to end the drunken violence that plagued Sydney's major nightspots. Along with Premiers Barry O'Farrell and Mike Baird they helped institute the lock out laws that have been a major factor in the reduction of alcohol related deaths and injuries in Darling Harbour, Kings Cross and Sydney's CBD. They were also instrumental in creating Take Kare Safe Spaces ('Kare' with a 'K' after Thomas's initials) for young people in key nightspots, which has now registered over 52,000 interventions since December 2014, what the Kellys call 'sliding door moments', the difference between a young person's life continuing on as normal or degenerating into something terrible. And they were one of the driving forces behind the introduction of tougher sentencing for 'coward-punch' deaths.

But their campaigning created a huge toll on their family. Online intimidation, death threats and false news about the mishandling of donations came from those with a stake in the clubs and businesses who were the lock out laws financial losers. When Stuart Kelly, Thomas's younger brother, went for his first night at University of Sydney's St Paul's College, Ralph and Kathy believe the bullying he experienced because of the family's profile was so traumatising he left university for good the next day, and wouldn't tell his parents exactly what he'd been made to endure. Five months later, on July 25th 2016, Stuart took his own life.

This book is the Kellys' story. How they coped with one unimaginable tragedy, only to find that it had sowed the seed for another. How in the face of these terrible losses they have found the spirit and the drive to campaign first for a safer environment for all our children, and for a greater understanding of young people's self-harm and its drivers.
More books by this author

Ralph and Kathy Kelly are the founders of the Thomas Kelly Youth Foundation. After losing their son, Thomas, to a cowardly one-punch attack in 2012, and their son Stuart to suicide in 2016, they have pro-actively campaigned for behavioral change in the community, social support for victims of violence as well as violence protection. This has resulted in the provision of Take Kare Safe Spaces in the Sydney CBD, a Financial Hardship Victim Support program through the Department of Justice and a two year UNSW research study of the Safe Space programs, that commenced in late 2017. As part of the Thomas Kelly Youth Foundation, the Kelly's have also created Stay Kind. Stay Kind is a youth suicide awareness campaign initiated by the Thomas Kelly Youth Foundation in early 2017 encouraging all Australians to care for each another. The campaign aims to raise awareness of and help prevent youth suicide.