The true story of an Australian mother, a refugee boy and what it really means to be a family 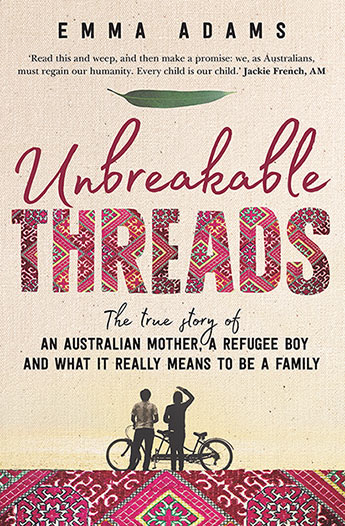 The remarkable true story of an Australian mother's fight to free an unaccompanied Hazara boy from detention, and include him in her family.

An extraordinary story of courage and kindness and the ultimate triumph of family over what, at times, seem like insurmountable odds.

'Abdul is dignified, defiant even, but his poise is beginning to wear thin in this place. He needs surgery for a chronic shoulder injury sustained when he was hit by a car in Kabul. Like the others in detention with him, he faces an uncertain fate, and years in limbo. Most of the people in the centre have already had their spirits broken.'

When psychiatrist and mother of three Emma Adams travels to Darwin as an observer of conditions for mothers and babies in the immigration detention centres there, she expects the trip to be confronting. What she doesn't expect is to return to Canberra consumed by the idea that she must help a sixteen-year-old unaccompanied Hazara boy from Afghanistan - Abdul.

The premise was simple: Wouldn't any teenage boy be better off staying with a family rather than locked behind a wire fence? In this brutal and bureaucratic system, freedom was a hopeless dream. Emma and Abdul's connection, and her fight to get him out and provide him with an Australian home, a family and a future, forms an important testimony in Australia's appalling treatment of asylum seekers. Their story is a beacon of hope and humanity.
More books by this author

Dr Emma Adams is a psychiatrist specialising in the wellbeing of mothers and babies. She was born in Sydney, NSW, and grew up in the country town of Armidale, NSW. She studied medicine at the University of Queensland and began working in the Canberra Hospital Emergency Department (ED). It was here, between the trauma calls in the ED, that a romance blossomed between Emma and Rob, who is now her husband. They live in Canberra with their three teenage sons.