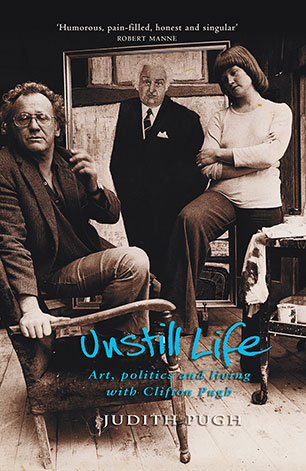 This portrait of a unique partnership is also the story of a pivotal time and place in Australian art and politics.

Judith and Clifton Pugh met in September 1970. He was an artist with an international reputation; she was twenty years younger than him and had just joined the Australian Labor Party. Their decade together was a heady mix of painting, policy and pleasure where the boundaries between political, social and art worlds were blurred, reflecting the rapidly changing face of Australian society. But there was a darker side to this successful partnership - for the first time, Judith reveals the complexity of a relationship haunted by wartime experiences.

This is a gritty behind-the-scenes look at Australia's most radical government, about the days when the likes of Gough Whitlam, Don Dunstan and Christina Stead came to stay and Bert and Barbara Tucker were among their closest friends. With a unique female perspective on the times, it's about influencing change and balancing power on both grand and intimate levels.
More books by this author

Judith was there, an integral part of the turbulent times. She has spent a lifetime in the arts, collaborating on Degenerates and Perverts (MUP) which won the 2005 NSW Premier's History Award and has contributed essays to many publications over the years, including La Trobe Essays (Black Inc., 2006).