Where the Hell Have you Been? 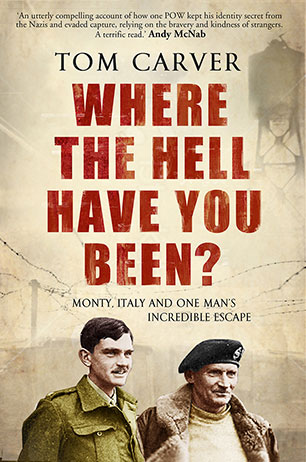 How Monty's stepson escaped the Nazis.

In November 1942, two nights after the Battle of El Alamein, a young British army officer was captured by German forces. As the Nazis deliberated about what to do with him and his peers, Richard Carver had particular reason to be afraid: unknown to anyone else, he was the stepson of General Bernard Montgomery, who had just inflicted the first serious land defeat on the Third Reich.

This remarkable wartime story tells of Richard' s internment in a POW camp in northern Italy - the same made famous by Eric Newby - and his subsequent escape when he decided to try and make his way back to Allied HQ, a high-risk strategy involving a grueling 500-mile journey through German-occupied territory. He evaded capture again and again, his life finally saved by a family of brave Italian peasants who jeopardised not just their own lives but those of an entire village to take him in.

In 1943, a year after he had disappeared, gaunt and exhausted, Carver staggered back into army HQ where he was greeted by a delighted but characteristically gruff Monty. Where the hell have you been? is a tale of great adventure and derring-do, a reminder of a lost age when, in the face of terrifying challenges, a generation rose to extraordinary feats of valour in the service of a cause greater than themselves.
More books by this author

Tom Carver was a long-time foreign correspondent with the BBC. He lived with the mujihadeen during the Soviet withdrawal from Afghanistan, walked with the Kurds over the mountains of Iraq and reported on the Rwandan genocide and the Bosnian war. He was latterly the BBC's Washington Correspondent and continues to live in Washington working as a writer and consultant. He is the step-grandson of Field Marshal Montgomery.