You Shouldn't Have Joined ... 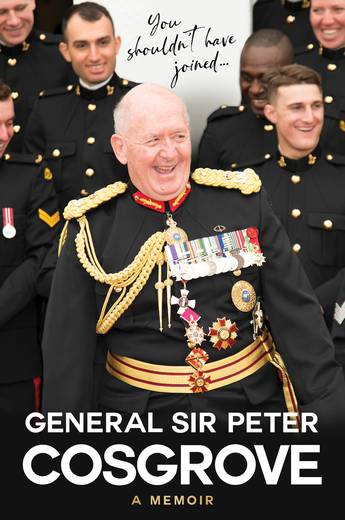 The warm, fascinating memoir of one of Australia's most popular and prominent public figures

General Sir Peter Cosgrove AK AC (Mil) CVO MC (Retd) is one of Australia's most significant public figures. As a soldier he saw action in Vietnam, winning the Military Cross, and rose to the very top of his profession, becoming Chief of the Defence Force. Soon after his retirement from the Army, he was invited to take charge of the huge relief and rebuilding operation in Queensland after the devastation of Cyclone Larry.

In 2014, Cosgrove became Australia's Governor-General. As Governor-General he travelled far and wide, supporting Australians in times of crisis, sadness, joy or celebration, representing us on the world stage with humour, intelligence and a force of personal magnetism that was felt by everyone from prime ministers to presidents.

When he retired in July 2019, it was as one of the most beloved and respected governors-general in Australia's history. Cosgrove embodies the traits we truly value: warmth, humanity, toughness and loyalty. His humour and empathy shone through the pomp and ceremony, and his time as Governor-General will be remembered as much for his laughter as for the usual dignities of the office.

You Shouldn't Have Joined ... (an expression much used during his days as a soldier) is the story of Cosgrove's extraordinarily full and eventful life. It is also the story of those who have shared it with him, in particular his wife Lynne.

His memoir allows us an incredible insight into the role and world of Australia's Governor-General. He was there as two prime ministers were toppled by their own party. He was there through disasters both natural and man-made, such as the destruction of MH17. He was there for world leaders, and for ordinary Australians. You Shouldn't Have Joined ... is a true reflection of the man himself, filled with intelligence, forthrightness, compassion and a brilliant eye for a telling anecdote.
More books by this author

Peter Cosgrove was born in Sydney in 1947. The son of a soldier, he attended Waverley College in Sydney and graduated in 1968 from the Royal Military College, Duntroon. Early in his military career, he fought in Vietnam, commanding a rifle platoon. He was awarded the Military Cross in 1971 for his performance and leadership during an assault on enemy positions.

In 1972, he served as Aide de Camp to Governor-General Sir Paul Hasluck. He returned to regimental life as second in command of a Company, rising to Adjutant then Company Commander in the Army's 5th Battalion Royal Australian Regiment (5 RAR), then 5/7 RAR in Holsworthy, Sydney. Subsequent appointments included a period as a tactics instructor at the Army's Infantry Centre in Singleton, New South Wales; a year's study at the United States Marine Corps Staff College in Quantico, USA; extended periods of duty in the United Kingdom and India; and command of 1 RAR. He was appointed a Member in the Military Division of the Order of Australia (AM) for his service in command in 1983-84.

Peter Cosgrove came to national attention in 1999 when, as Commander of the International Task Force East Timor (INTERFET), he was responsible for overseeing that country's transition to independence. For his leadership in this role he was promoted to Companion in the Military Division of the Order of Australia (AC).

Promoted to Lieutenant General, he was appointed Chief of Army in 2000. After further promotion to General, he served as Chief of the Defence Force from 2002 to 2005. He retired from the Australian Defence Force in 2005. Subsequently, he accepted positions on several boards, including QANTAS, Cardno and the Australian Rugby Union. He was appointed by the Queensland Government to lead the taskforce rebuilding communities in the Innisfail region following the devastation caused by Cyclone Larry in 2006. From 2007 to 2012, he chaired the Council of the Australian War Memorial, and served as Chancellor of the Australian Catholic University from 2010 until early 2014.